It’s the culmination of another baseball season, as the Chicago Cubs and Cleveland Indians hope to break their 108-year and 68-year championship droughts. Here at Chrome River, we’re quite excited, and we must admit to having a bit of a preference for the Cubs, as they are one of our customers.

While Chicago and Cleveland have two of the lowest amounts of miles traveled of all MLB teams, the Cubs still cover more than 26,000 miles over the course of a regular season, spending upwards of 75 nights on the road – and that’s not even considering more than a month of Spring Training. Of course, the post-season is even more complex, as travel plans may change on just a few hours’ notice.

Pro sports franchises’ travel managers need to coordinate a variety of logistical items for their teams, and while it may look like an industry where money isn’t a concern, spend needs to be controlled and accounted for, just like any other organisation. Policies need to be created and adhered to, and expenses and invoices need to be tracked and reimbursed. In fact, sports teams need expense management just like any corporation looking to control costs. So, what are some of the areas that need to be considered?

Flights and hotels: All pro teams now travel exclusively on often-luxurious charter flights, so there is no need to worry about booking airline tickets for 50 players, coaches and clubhouse members. These contracts are negotiated in advance with the airlines, so are paid for using invoices instead of a corporate card. Although hotel rates are also negotiated in advance with preferred chains (being able to track how much you spend each year can certainly help to secure preferential rates), travel managers will often need to pay for the rooms with a team’s credit card upon arrival.

Upon checkout, the travel managers will also need to cover any incidentals incurred during the stay, such as room service. With such a large number of rooms and up to four nights at a time, hotel folio receipts can understandably become quite unwieldy, so the ability for travel managers to simply import the folios directly into an expense tracking solution can save many hours of manual administrative time from the back-office staff.

Per diems: Despite the average baseball player earning more than £4 million per year, they are still entitled to a £100 per diem on the road to cover food, aside from meals consumed in the clubhouse before and after a game. Players’ per diems need to be managed, allocated and distributed, either via a card or cash advance.

Other travel: Players and coaching staff need to get to and from the airports, as does players’ personal luggage, as well as uniforms, equipment and so on – often several tons’ worth. This requires busses to be rented in each city. As with all other travel arrangements, this is relatively straightforward during the regular season, but can become quite difficult during the post-season, where travel arrangements can change – or be canceled – based on a single pitch.

Incidentals: Like all business travellers, pro sports players often have incidentals on the road that they need to pay for – not packing enough underwear for the trip, needing to get a suit button repaired and so on. However, unlike many other travellers, they don’t typically go to the store or do their own sewing repairs. This means that other members of the travelling staff will need to make these purchases, and then expense them for reimbursement and allocation to the individual players’ accounts.

Scouts: While the playing team has all of their flights, hotels and meals taken care of by the back-office team, life isn’t so easy for the teams’ scouts. MLB teams typically have 10-25 scouts, each of whom is often on the road for anywhere up to 200 days per year. For these individuals, who often need to book their own flights, cars and hotels, the need to effectively manage travel and dining expenses while on the road is critical, as having to hang on to countless receipts simply isn’t an option. Therefore, they need a solution that allows them to simply capture expenses in real time, and create and submit expense claims from their smartphone.

Of course, this is just a small sample of the types of expenses that teams can incur. These organisations often employ many hundreds of non-playing staff throughout the year, who are responsible for everything from travel planning to marketing to turf and stadium maintenance, and will often incur out-of-pocket expenses.

While playing up to 180 games per season is certainly a test of endurance for the players, managing the logistics and the related expenses of a team’s operations can be equally grueling. When the two teams face off tonight in the “Friendly Confines” of Wrigley Field, we’ll be cheering for our Cubbies hoping that we’ve made their season just a bit easier. 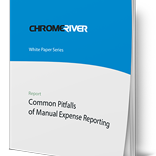