We recently conducted a survey of more than 1,000 business travelers across the U.S. about travel expense fraud. We’ve previously conducted these surveys in 2016 and 2018, which focused more on which groups are most likely to conduct expense fraud, at what rates, and how much they steal on average. This year we decided to take a slightly different approach. Although we looked at quantitative data as well (which you can read about in the full report), two areas we wanted to get information on were about why those who commit fraud choose to do so, and conversely, what keeps the majority of people honest?

The justifications that individuals gave for claiming excessive expenses varied significantly by gender. Forty-four percent of each group rationalized their actions by claiming that they were simply making up for other small expenses that they were unable to submit for reimbursement. Similarly, 13% of men and 10% of women justify their behavior because they deserve it for all the travel and late nights that they do for the company.

Aside from this there were significant differences. Men’s approach to expense fraud was more calculating than women, whereas women were more prone to try and justify their behavior. Some of the key points were:

On the other side of the equation, there was remarkably little difference by gender, age or household income for why travelers choose NOT to submit fraudulent expenses. There was less than a 5% difference for any demographic group from the overall respondents.

Read more: 7 of the Most Common Expense Scams (and How to Stop Them)

The vast majority of respondents appear to not even have been tempted to commit expense fraud, with 63.2% saying that they have never considered doing so, with 56.2% saying that to do so would be against their personal morals.

The potential risk versus reward is only a factor for a quarter of travelers, and just 4.4% of respondents said that fear of being caught was a factor. Similarly, only 4.1% say that their organization’s expense process would make it hard to be reimbursed for fraudulent expenses without being caught.

You can find more of the highlights from our survey on the infographic. You can also download a free copy of the entire report, which contains useful insights into a broad range of data points surrounding corporate expense fraud. 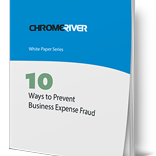